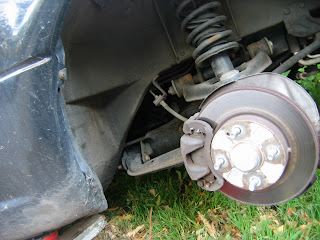 The top photo shows the passenger side front wheel. 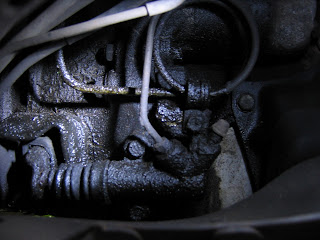 The second photo shows the slave cylinder which is accessed by looking past the passenger side front wheel.  You cannot see the flexible hose.  You can see a hard line slave loop.  Just to the right of the hard line connection is the air bleed nipple which is covered by a light gray rubber cap.  ( I lost said cap while flailing around near the slave. ) 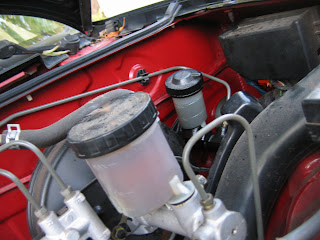 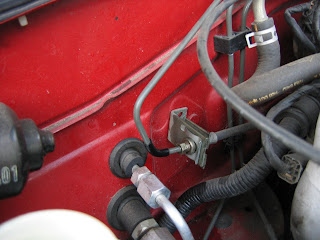 The 4th photo shows the connection between the hard line ( that runs from the master ) and the flexible hose that goes to the slave cylinder.

I started looking at the clutch hydraulic system because the clutch pedal started by getting soft and then after a few days ... went to the floor with no activation of the clutch.  The clutch was always engaged.  I drove about 20 miles ....  I put the shifter in first gear ;  then I started the engine ... shifted gears without the clutch ...... turned off engine when I had to stop for a light.  I only had to stop 3 times because traffic was very sparse and I was able to time the lights.

2011m10d20
Now I have discovered there is a steady leak  ( a drip every 5 seconds ) from the slave.  At first I thought it was leaking from the piston assembly.  I removed the slave from the Miata.  The slave is held on by two bolts.  One is kind of hard to reach and requires a open end wrench and some contortions.  Perhaps is would be easier on a lift.  Maybe a flex coax drive would help. ....... Anyway , I got the slave out and took it apart.  I was surprised to find corrosion and a blob of gunk/dirt/  inside the piston barrel.  Perhaps the DOT3 fluid was absorbing water and that lead to corrosion.  I cleaned everything up and reassembled the slave and reinstalled the slave.  I was surprised to see the same steady drip ... it was coming from the air bleed nipple.  I tightened the nipple as much I thought safe...... The nipple still leaked.  ( I am leaving out  a lot of false moves and cursing from this story )  I created a rubber seal from some rubber I had laying around.  It was a cylinder about 5 mm in diameter and about 5 mm high.  This seemed to seal the leak.  It also made it more difficult to bleed the air from the clutch line.  Now the clutch is stiff and seems to work.  We shall see how long the clutch works. 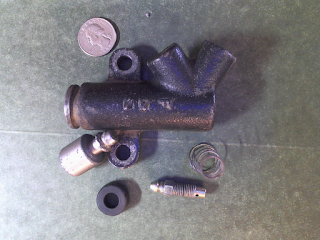 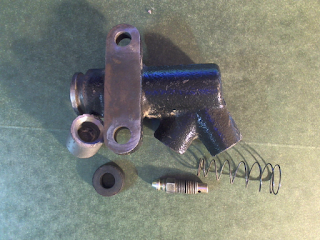 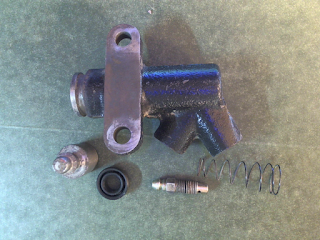